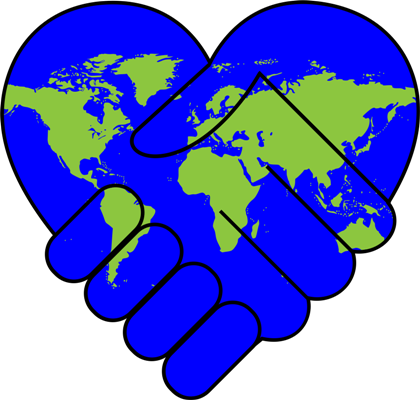 First of all, we are all human beings. Your religions, caste, sex, the country you are born, etc are just a formality. The main point here is we are all families. Peace comes from human beings which means we are all families. We must realize that peace can only come from human beings not animals. If human beings are not in a favor of peace then don't expect that you will be save on roads or wherever you go. You must have heard people saying, "I wish there's a peace in this country" but have they done anything that inspires people to bring peace. Absolutely not, why? Because they only say but have no feeling of what it really means to have a peace country or  a completely peace world. Peace has not been establish in the world because of selfishness of people and even jealousy among the country. This jealously comes from the politics. The good leader will never try to destroy the country and try to control the country as well.

I'm not talking about the peace of the mind here. Many people says that if you want peace, try to control your mind or have a peaceful mind. Well, if the world is not in peace then how can people be in peace no matter how master they are in controling their minds or their emotions. Most people are not willing to sacrifice for the peace of the country. They are afraid that they will be targeted and get killed by bad guys. But the thing is this can be change. Bad guys are are formed when they cannot control their brain and have no confident in them. That is why they chose the wrong way because it does not take any hard work in that direction. Peace has always been so many people's dream around the world. The people who are destroying the peace are mainly criminals and some politicians of the country.

Money is needed for every human beings but do you realize, money is one of the reason that is destroying peace? When people have no money, they chose the path of criminality which is a threat to the world. Because of the criminals, many people have lost their belongings, their families, friends, relatives and some eve their career. You may thinking, What? How they have lost their families, friends, relatives, is this guy some kind of weirdo? But let me tell you something, when you're walking on the street, somebody target the gun on you saying give me the money, but you refuse and fight them. Then they hit the trigger accidentally and on your side is your friend shot by the gun on chest and he dies on the way to the hospital. Around these many years I have seen that criminals are put in the jail just to make sure that they dont involve in any of the activities that harms other people or the country. Bur i have never seen people showing the right path to criminals. If only there's a library in the police station where they keep positive books like self - help books and a very good novels then it can change their mind. There must be a mentor of individuals who are in the jail, to help figure out their interest and keep motivating them to achieve all the goals. Every thing we people do is by the brain. If we can control our brain then we succeed in anything but if we cannot our brain then you're always in trouble.

Another thing to destroy the peace is rape. Not a rape of girls only but boys are some the victim of rape. Why do people rape? Because they cannot control their emotions, they picture some a particular girl walking on the road wearing short cloths and that sex emotions start to hit them which they cannot control which leads to raping a person whether it's a boy or girl. The second part of the rape is murdering them after rape. Why do they murder when they finish raping them? Because of the fear that circles their every part of their brain. The rapists have thoughts going on their mind saying, "If she is alive then she is sure to file a case on me. I dont want to go to jail. It's better to kill then to set her free". Then the rapist kills them in very unimaginable way. This very incident has cause on effects on several citizens. Because of this incident  people are afraid to go outside safely which leads to destruction of peace. Due to this people have chosen the private life. To prevent this, people should learn self defence technique specially girls. Every school and universities should have self defence class which enables them to protect themselves when they are in danger. This will atleast alert rapist and other people who are involve in criminality.

There are other things which destroys peace of the world like politics. Many country are so rich in something which other country are not like Iran and Iraq, they are rich in oils but America is attacking them because they want to capture oil for the future use. Many people have died including innocent people just because of the war going on between countries. The leader of the country are responsible for this and they have to stop this. This is when selffishness hits the leaders.

At last, all i want to say is we must prepare to bring peace and we have to start from now. We have to teach people especially children as they are our next generation leaders to always meditate at morning and teach the path of love, comapassion and kindness. Because this is the only assets that can truly bring peace around the world. Then only when we watch news, newsreader can tell, "There is peace around the world today. We have defeated all kinds of violence. Humanity is  100% from today on". May we hear this news one day.